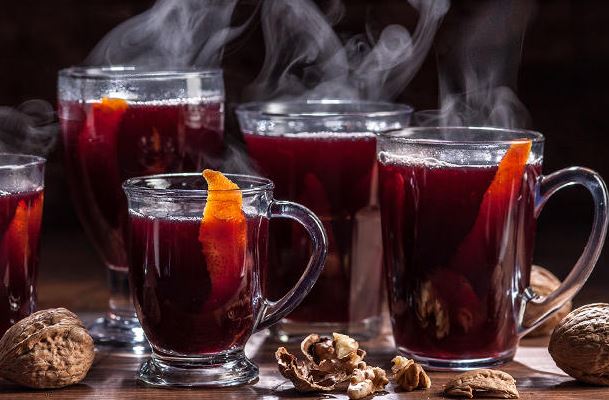 First recorded as heated and spiced in the first century Rome, the wine was what the Romans consumed during their travels across Europe and traded in, while Mulled was the most popular when it came to Christmas in Victorian England.

In all German-speaking countries, Gluhwein is the most popular, while it is also extremely popular in Alsace, France. Gluhwein is mostly consumed during the holidays surrounding Christmas worldwide and the oldest documented Gluhwein use goes back to the German nobleman, Count John IV of Katzenelnbogen who was the first to grow Riesling grapes and the oldest gold-plated lockable tankard still in existence dates back to c. 1429.

Mostly prepared from red wine, Gluhwein is most loved as a heated wine spiced up with cloves, citrus, cinnamon sticks, sugar, aniseed and vanilla pods. There are many different variates of Gluhwein, and the most popular variant is that available in Germany labelled Feuerzangenbowle. This Gluhwein variant shares a recipe with rum-soaked sugar loaf, which is placed above the wine, set alight, which allows the rum to drip into the wine.

Gluhwein Enjoyed in Other Countries Around the Globe

Known as Bisschopswijn in the Netherlands this amazing drink is named to literally mean the bishop’s win and it is most enjoyed during the Sinterklaas holiday, while its ingredients replace lemons with oranges.

Vin chaud in France is what the “hot wine” is known as and in most cases, it consists of a cheap red wine that is enhanced via cinnamon, lemon and sugar, although the wine must never be too sweet.

Greyano is the heated wine consisting of red wine infused by peppercorn and honey most loved in Bulgaria. The Greyano also includes at times citrus fruits, apples as well as oranges or lemons.

Heated or mulled wine is called svařené víno, which means boiled wine in the Czech Republic. Boiled wine is also popular in Hungary where it is called forralt bor, Hungarians makes boiled wine from a cheap version of Egri Bikaver and then spice it up with cloves and cinnamon.

Brule is what is enjoyed in Italy, the name means burnt wine, while in Latvia the heated or hot wine is called Karstvins and it is prepared by using Riga Black Balsam and current or grape juice.