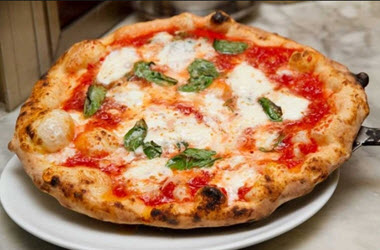 A visit to Italy simply can’t be competed with tasting the best pizza, it is where pizza originated, and the first was made on the 11th of June 1889, Raffaele Esposito made it in honour of the queen and till this day Margherita pizzas are garnished to represents the colours of Italy, which includes basil, tomato and mozzarella.

The pizzas in Naples are simply delish, and it is really a challenge to find pizza that is not simply magnificent. The best according to tourist rating is the pizza served at Di Matteo, a pizzeria in existence since 1936 that offers the best service. The fresh pizzas from the oven are wrapped in white paper, rolled up as a pie and the one most recommends is the provolone an ricotta cheese pizza that is deep-fried.

In Naples Pizza is life to Gino Sorbillo

Sorbillo took over from his father, who took over from his grandfather and now his granddad’s legendary Naples pizzeria is world renowned. It opened in 1935 and last year was featured in the Top 50 Pizzerias, it has also won several awards. The pizzas stand out as it offers a soft crust, it’s made into Neapolitan pies and then topped with basil, mozzarella and local tomatoes. A second pizzeria opened in New York, and the next is planned to open in Milan, so maybe this is the brand soon to be enjoyed worldwide.

In Rome, pizzas are called Panattoni or Marmi after the long counters made of marble it is served on. Cafeteria-style searing is available in most of the popular pizzerias, and at Ai Marmi, the best Roman-style pizzas have a crisp crust and offer a centre that is laden with cheese and sauce. The must-try pizzas include the Margherita or the Salsiccia e Fior di Zucca which is topped with zucchini blossoms and sausage.

The gastronomy bible Gambero Rossa named it in March the best pizzeria in Italy, so don’t miss the change to enjoy a pizza at Mamma Rosa. Made Neopolitan-style the pizzas offer a thin crisp crust topped with divine ingredients, one of these that stands out is the Sorriso, a Margherita added to via red chillies as well as anchovies while the Lucifero offers hot peppers and hot salami, and to end off the meal perfectly you could order the Nutella pizza to enjoy Italy’s best dessert.

Giovanni Santarpia graduated from Palazzo Pretorio in Poggio and opened a pizzeria in Florence, this all took place in 2015, and since that exciting day, the pizzeria is hugely popular. Most of the pizzas offer completely unexpected flavour combinations, and maybe this is why nonene seems to get enough of it. Some are served in traditional Florentine cuisine style other topped with lampredotto, or pumpkin, while the heavenly pizza secret according to the owner is that the dough is left to rise for at least 48 hours before use, which ensures airy and light pizza bases.