Pizza has to be one of the best culinary inventions of all-time. There are many areas in Italy that lay their claim to the creating of the pizza and while that may never be proven here are some fun facts about pissa, one of the most popular foods in the world.

Flatbreads with toppings have been around forever around the world, but in Naples Italy in the 1600’s they are thought to have come up with the first pizza how we know it today. At first, it was a street food for the poor, who would buy them as a snack or meal on the street and t first the food was not thought of kindly being a street food of the poor.

The Margherita is Born 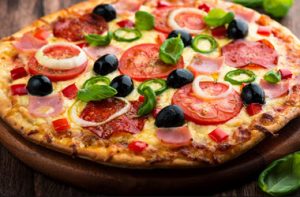 King Umberto I and Queen Margherita made a journey to Italy in 1889, when the country was newly unified, and they were not happy with the cuisine they were receiving being from royalty. A baker in Raffaele Esposito was summoned to make them something with Italian flavour and he created a pizza with tomato sauce, basil, and mozzarella, which are the colours of the Italian flag in red, green and white. The king and queen loved it, and it was dubbed the Margherita, which is still one of the more popular pizzas in the world today.

The U.S, Gets in the Picture

Near the turn of the 1900’s, pizza was not popular outside of Italy. However that changed with the rapid migration flow to the United States. While the pie was pretty popular in the U.S., it even got more so after World War II when the servicemen wanted the pizzas they got while serving in Italy.

Gennaro Lombardi opened the first pizzeria in American in 1905 in Manhattan. He lived in a neighbourhood that was rapidly-growing with Italian immigrants, who were more than happy to have a slice of home when they came to their new country. In a couple of interesting facts, Lombardi’s is still going strong to this day and while not at the same location as in 1905 the same oven is still used from that period to make the pizzas.

By the time the 1930’s rolled around in America pizza was very popular with pizzerias opening all around New England and, especially the East Coast. In 1943 Chicago pizza started to gain steam as well with the opening of Uno’s by Ike Sewell with thicker crust, which is a staple for pizza in the Windy City.

After the 2nd Big War

When World War II veterans returned home they wanted the same pizza they got overseas. At was at this time that former serviceman Ira Nevin invented a gas-fired pizza oven and this revolutionized the pizza industry. This made it possible for retailers to make fast and inexpensive pizzas without having to use the slower burning coal or wood as a heat source.

The Chains are Here to Stay

We all know the many pizza chains, and two of the more popular ones in Pizza Hut and Little Caesar’s opened in 1958 and 1959 respectively. Today there are many chains, and in the United States alone there are in excess of three-billion pizzas sold every year.